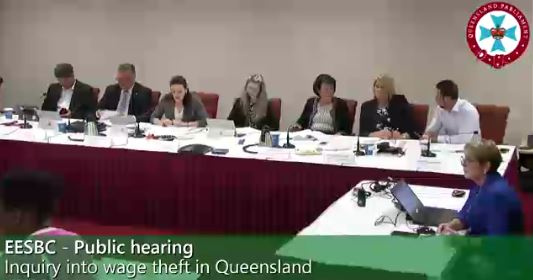 A parliamentary inquiry into wage theft in Queensland has made 17 recommendations to help address the problem in the state, including the introduction of criminal penalties.

The report, by the Education, Employment and Small Business Committee, found that 437,000 workers were not being paid proper wages, costing the Queensland economy $2.5 billion every year.

“Combined with an estimated $100 million reduction in consumer spending and $60 million in lost federal tax revenue, the overall economic loss could amount to almost $2.5 billion stripped from the Queensland economy every year.”

The committee made a total of 17 recommendations including: 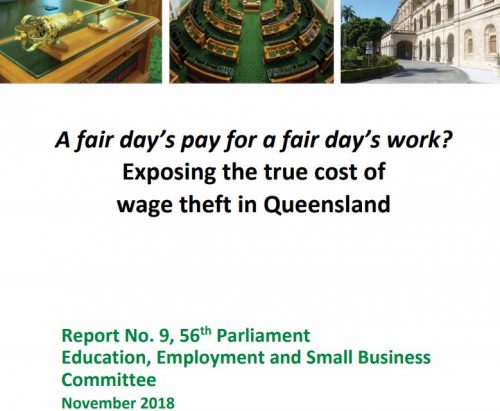 The report into wage theft in Queensland by the Education, Employment and Small Business Committee.

Industrial relations advocate Miles Heffernan, from Industrial Relations Claims, who gave direct evidence to the inquiry, praised the report and its recommendations – many of which were included in his submission.

“This was not some sort of once over lightly job – the committee has taken this issue extremely seriously, and made some sensible and practical recommendations,” he said.

“If the government is able to implement most of the recommendations, it will go a long way to reducing the incidence of wage theft in Queensland.

“We look forward to some positive action from the government to ensure that hard working Queenslanders are protected from greedy bosses who want to rip them off.” 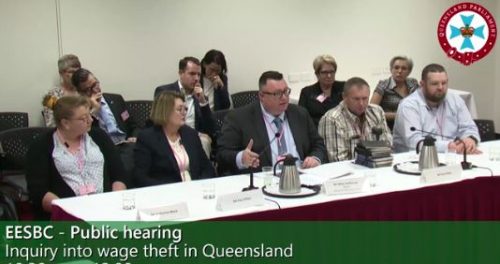 Miles Heffernan giving evidence to the inquiry with four of his clients who are victims of wage theft.

Pecuniary penalties should go to the worker and not the Crown