The Queensland government’s inquiry into wage theft has been told employers who steal wages from their employees should face jail.

The call to make wage theft a crime comes in an explosive submission by Industrial Relations Claims published by the inquiry today.

Wage theft ‘endemic’ in many industries

For example, hospitality, retail, fast food, and hair & beauty – where it’s estimated that one in two workers is underpaid.

“Employers have been stealing from their workers for way too long,” Mr Heffernan said.

“And unfortunately, it’s going to keep happening until both state and federal governments start getting serious about introducing criminal penalties.”

Currently, it is a crime for an employee to steal from their employer, however, no such offence exists for a boss who steals from a worker.

“This is fundamentally an unfair playing field, and greedy employers are taking advantage of it,” Mr Heffernan said.

“They are laughing all the way to the bank with their worker’s money.” 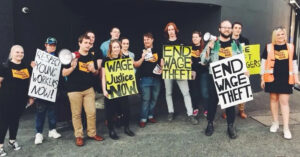 The wage theft inquiry is holding a number of public hearings in the coming weeks before delivering its recommendations to the government in November.

Meanwhile, both the Victorian and New South Wales Labor parties have pledged to criminalise wage theft if they win their upcoming elections.

“Employers who steal from their employees are nothing more than common thieves,” Mr Heffernan said.

“And until we start convicting them and locking them up, nothing much is going to change.”

Young apprentices are easy targets for exploitation by greedy bosses, according to employment law experts.…

Wage theft penalties should go to the worker and not the crown, employment law experts…