A Sushi store operator has been penalised a whopping $124,416 for deliberately underpaying migrant workers.

The wage theft happened despite the Fair Work Ombudsman previously warning the employer about paying proper wages and entitlements.

She underpaid the employees, Korean nationals on working holiday and student visas, amounts ranging from $103 to $1,992.

In May 2015, the regulator formally cautioned that enforcement action would follow any future contraventions of workplace laws.

Despite this, inspectors discovered that she continued to steal from her workers when they audited more than 40 sushi outlets across Canberra, South-East Queensland, and various regions in NSW.

Judge Brana Obradovic found that the wage theft involved deliberate conduct that included the underpayment of “basic and fundamental entitlement[s]”.

“The Court finds that the contravening conduct was deliberate in light of [Ms Shin’s] admitted knowledge, prior audits, history of employee complaints and the education provided by the Fair Work Ombudsman.” 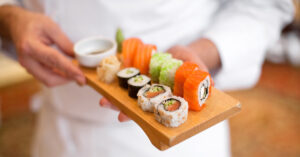 “Cheap sushi comes at a cost – most outlets ripping off workers”

“This is yet another case that proves current penalties for wage theft are not enough of a deterrent for dodgy bosses,” he said.

“Wage theft should be a crime – just like all other forms of theft.”

A petrol station attendant has been awarded $64,800 after his employer did not allow him…