The surprise compliance checks started on Monday and involved businesses located in the suburbs surrounding the two Deakin University campuses.

In addition to the raids, inspectors also demanded records from 150 other similar businesses in the target area.

Fair Work Ombudsman Sandra Parker said the compliance operation came about as a result of wage theft complaints from workers in the area.

“Most requests for assistance we receive from students relate to underpayment issues, such as being paid unlawful flat rates which do not factor in higher penalty rates for weekend casuals, or not receiving important entitlements like annual leave if they are permanent employees.” 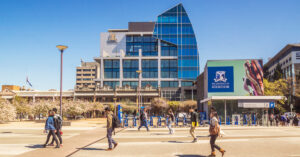 “Fair Work’s role is to enforce workplace laws, so it is always encouraging to see them do their job,” he said.

“Previously, the regulator put too much emphasis on education, rather than enforcement, and that’s why wage theft is rampant in many industries.”

Mr Heffernan believes wage theft should be a crime.

“Monetary penalties, no matter how large, do not work as a deterrent,” he said.

“Therefore, it’s time to start locking up dodgy bosses until they get the message that stealing your worker’s wages is not acceptable.”

Meanwhile, Fair Work says if inspectors discover any wage theft or other non-compliance during their audit campaign in Geelong, it will ensure that affected employees will be back-paid any money owed.

Fair Work recovered $431,875 as a result of the audit campaign targeting the Deakin University precinct in Geelong.

Of those businesses, more than half underpaid staff and failed to keep proper records and provide pay slips.

Adelaide's Chinatown is rife with wage theft, according to the workplace watchdog. Fair Work inspectors are…