Uber drivers are employees, and not independent contractors, the UK’s Supreme Court has ruled.

The ride-share company will have to pay thousands of Uber drivers the minimum wage and holiday pay as a result of the landmark decision.

The UK decision will be studied closely by Australian unions and industrial advocates who have long argued gig economy workers are employees and not contractors.

Uber drivers are employees and not contractors

The pair took Uber to an employment tribunal in 2016, arguing they worked for Uber, and not engaged as independent contactors.

However, the company argued it engaged the drivers as self-employed contractors, therefore it’s not responsible for paying minimum wages or holiday pay.

The employment tribunal ruled in favour of the drivers. 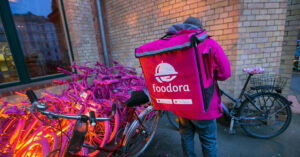 Uber appealed the decision to the Employment Appeals Tribunal which subsequently upheld the original decision in November 2017.

Then the company took the case to the Court of Appeal, which also upheld the ruling in December 2018.

Finally, Uber appealed to the Supreme Court, which upheld the original decision too.

In his judgement, Lord Leggatt said that the court unanimously dismissed Uber’s appeal that it is an intermediary party.

Furthermore, he said Uber drivers work while driving a passenger, and also whenever logged on to the app.

The court considered the following in its decision:

Looking at these and other factors, the court determined that drivers are in a position of subordination to Uber.

Furthermore, it found the only way drivers can increase their earnings is to work longer hours.

“Currently there is an argument about whether Aussie gig economy workers are workers or contractors,” he said.

“In one case, the Fair Work Commission ruled in favour of a Foodora worker who claimed unfair dismissal.

“But in another case, the Commission ruled that an Uber Eats driver was an independent contactor.

“The government needs to impose regulations on the gig economy to give certainty and to ensure workers aren’t exploited.”

“We respect the Court’s decision which focussed on a small number of drivers who used the Uber app in 2016.

“Since then we have made some significant changes to our business, guided by drivers every step of the way.

“These include giving even more control over how they earn and providing new protections like free insurance in case of sickness or injury.

“We are committed to doing more and will now consult with every active driver across the UK to understand the changes they want to see.”

Fair Work has dropped its legal case against Foodora, after the company left Australia in…