IT boss Samran Habib reckons young Aussie interns are lazy because they don’t want to work for him for free.

A recent news.com.au story about Habib accused him of exploiting young interns to help build websites for his company without paying them.

He says keen young workers are vulnerable to exploitation by unscrupulous bosses who offer unpaid internships or work experience.

“Many keen young people want to get their foot in the door and start their career,” he said.

“Unfortunately, that leaves them particularly vulnerable to exploitation from employers who want free labour.”

News.com.au spoke to Anastasiya Tsymay, an intern who worked without pay for Habib’s company.

He tasked them with building websites and doing other unsupervised work.

He expected the interns to attend the office twice a week and complete 25-hours of work from home, according to Tsymay.

“What we’re doing should be paid.

“It’s a lot of website design work, we have to design the whole website ourselves, do all of the market research, it’s just so much work.”

Lazy interns ‘rather work at Bunnings’

When questioned by the media about his employment practices, Habib suddenly ended the unpaid internship scheme.

He denied any suggestion of exploitation or wage theft, and then went on the attack.

Habib described Australians as “lazy” who would “rather work at Bunnings” than put in the hard yards to advance their career.

In addition, he said he provided the interns with laptops, logins, work spaces and office keys.

Habib also said there was “no compulsion” to work a set number of hours per week.

“I’m not getting any commercial benefit, it’s for their own good.

“If they think I’m exploiting them I should draw a line, let them know it’s not a good way to pay someone back who is giving you a favour.

“These Aussies would rather work in a warehouse, a bar, a restaurant, or a Bunnings than do hard work, learn some skills and do some unpaid internships to advance their career.” 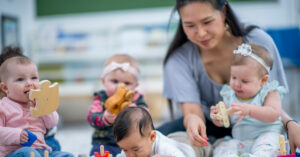 “Childcare operator fails to pay any wages for an entire year”

However, at the end of the period, the law firm refused to employ him.

“I was just passionate about becoming a lawyer, but when they got rid of me, I was feeling disgusted, betrayed, depressed and just sad that this sort of thing could happen.

“I felt used, and I felt like this isn’t fair and it shouldn’t happen to other people – so I thought I would take action.”

Since publishing this article, Samran Habib contacted WAGETHEFT.net.au and requested we publish the following statement:

The Fair Work Ombudsman has reviewed the situation after the articles published on various websites, which included the claims made by the concerned interns.

Based on signed internship agreements, DFSM or Samran Habib were not legally parties to the internship.

Furthermore, neither DFSM nor Samran Habib were found guilty for any wrong doing whatsoever in relation to the internship or the claims made in the articles and the case has been closed without any further action required from any parties.

Samran Habib never made those comments nor statements which were published in news.com.au story.

A sushi outlet operator has been penalised $200,000 for running a dodgy internship program that…

Childcare operator fails to pay any wages for an entire year

A childcare operator failed to pay two workers any wages for an entire year. Instead,…