The workplace watchdog conducted surprise visits to major stadiums around Australia after receiving wage theft complaints in addition to allegations of sham contracting.

Fair Work made the surprise visits during September and October last year.

Inspectors checked records in addition to interviewing cleaners and supervisors at:

As a result, Fair Work found seven of the nine companies in breach of workplace laws.

The companies failed to pay their workers proper:

However, they did not find any sham contracting or misclassification of employment. 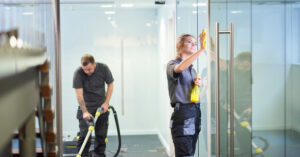 As a result of the investigations, Fair Work recovered:

Records showed no breaches at AAMI Park, however.

As a result of the breaches, Fair Work issued:

For example, the need to review existing contracts.

“We expect all cleaning employers to comply with workplace laws.

“The heads of all supply chains should be aware that they can be held responsible if they are found to be involved in any breaches by their contractors.”

A cleaning contractor has been hit with a huge $144,000 penalty for ripping off three…