A petrol station attendant has been awarded $64,800 after his employer did not allow him to take toilet breaks.

The South Australian Employment Tribunal also found the employer failed to allow meal breaks in addition to underpaying the worker more than $2,000.

Thomas Mathew worked as a console operator at one of the outlets between November 2015 and December 2016.

The employer underpaid him in three ways – by:

Management instructed Mathew to get to work 10 minutes early for a shift handover, however, OTR failed to pay him for that time.

The employer also failed to provide any meal breaks during six-hour shifts.

Instead, manager Michael Vezspeller said over the course of up to 1.5 hours, Mathew could take a number of short breaks between serving customers, which together would add up to 30 minutes.

He argued this satisfied the meal break definition of his employee agreement.

However, the South Australian Employment Tribunal found this did not meet the agreement’s conditions.

“The applicant was then given an instruction to eat a meal before he attended work, and that he should not go to the toilet while at work because the toilet was outside the building and the store would need to be locked for that purpose.

“Due to the broad range of duties to be completed the applicant did not generally have time for a meal break of 30 minutes that was meaningful to him.”

Mr Lieschke found Mathew lost 15 unpaid minutes and 30 paid worked minutes docked for each long shift, which added up to more than 10 percent of his low trainee wages.

He described the unpaid work contravention as “brazen” and “very serious”.

“It was deliberate exploitation of a low-paid hard-working employee.

“It was not careless or the result of a mistake … And it was systematic and backed by the possibility of disciplinary action.”

Shahin Enterprises says it will defend the wage theft claim and has offered to correct any payment errors. 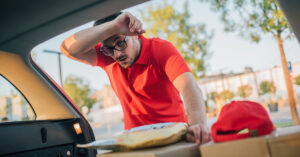 Meanwhile, industrial advocate Miles Heffernan said employers who demand workers start their shifts early to set up or hand over without paying them are committing wage theft.

“If your boss directs you to start 15 minutes early, then your employer must pay you for that 15 minutes,” he said.

“Additionally, refusal of breaks is a form of wage theft, and can result in a substantial underpayment claim.”