Industrial Relations Claims has told an inquiry there is no excuse for wage theft.

He told the EESBC that wage theft is endemic in many industries and recommended criminal penalties for employers who steal workers wages.

Mr Heffernan also recommended changes to legislation to make it quicker, easier and cheaper for workers to recover their wages.

The EESBC is investigating the incidence and the impact of wage theft in the state.

The committee is also investigating why it happens and which industries are impacted.

Mr Heffernan rejected any suggestion that wage theft happens as a result of mistakes by employers confused by a complicated award system is nonsense.

“You have heard from restauranteurs and child-care centres,” he said. “These people have to understand child safety and the complications of food hygiene and cross-contamination, yet they cannot understand the basic financial components of how to employ their staff?  It is nonsense; it is not that complicated.”

“The Fair Work Act came in in 2009, and award transitional provisions existed over five years from 2010.  Perhaps up until 2015, there may have been an argument that awards converting from a state environment to a federal might have been tricky, but it is 2018.”

Mr Heffernan’s clients told their stories of wage theft to the EESBC. 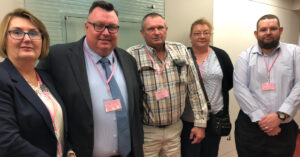 Ms Black told the committee she worked on a fixed contract stipulating 40 hours a week.

Despite this, her boss forced her to work 444 extra unpaid hours.

“Being in a corporate catering environment, which I was, the boss says that you will finish at two but then you do not finish until six or seven at night and you are on a salary,” she said.

“There is no compensation, I suppose, for working those extra hours.  When you go to the boss and say, ‘I’m doing all these hours,’ they say, ‘That’s just business.’  That makes it very hard for us.”

Ms Clifton told the inquiry the Fair Work Ombudsman refused to help her and a colleague recover $70,000 in outstanding entitlements.

“I do not think we were high profile enough for the Ombudsman; we were just little fish,” she said.

“I just do not think they cared, to be quite honest.  Even when I found Miles and his company, I still have not heard from the Ombudsman to say, ‘Your case is at this point.’

“As far as they are concerned, I am still in the queue somewhere or other.  The whole thing was terribly traumatic and very stressful.”

Mr Rake told the EESBC Fair Work also refused to help him recover more than $200,000 is stolen wages and superannuation.

This happened despite Mr Rake having payslips and detailed work and time records proving the wage theft.

Mr Gardner-Hudson also said Fair Work fobbed him off too.

He couldn’t afford to engage legal services to recover the $40,000 owed to him.

“To me, it was unfair.  I did that work, I put in that effort, but I still had to pay for me to recover the money for it,” he told the committee. “I do not think that is fair.  That is not right for me.  I did not do anything wrong.”

Mr Heffernan told the inquiry that Fair Work is failing in its role to police wage theft.

He said the regulator commenced just 33 litigations in a year, with a budget of more than $110 million.

“Out of desperation, these people have all had to pay for a service that should have been out of the $110 million that went to the Ombudsman,” he said.

“Instead, the Ombudsman is an education department rather than an enforcement department.  We say that they have got the balance wrong.”

Mr Heffernan also called for the local Industrial Magistrate to handle wage theft complaints to make it quicker, easier and cheaper for workers to recover their wages.

Currently, workers have to file wages claims in the costly Federal Circuit Court.

“Right now we say that if you give the magistrate some legs and have a proper change to the industrial relations tribunal rules we can do this now,” he told the inquiry.

The committee will deliver its report to the Queensland government in November.