An audit of Domino’s takeaway pizza outlets has revealed almost all of the stores are not complying with workplace laws, with most ripping off their workers and not keeping proper wage records.

While individual stores seem incapable of paying legal wages and entitlements to their hardworking staff, Domino’s boss Don Meij  doesn’t seem to have any trouble being paid his annual salary of $36.8 million – the highest paid CEO in the country.

Most stores ripping off workers

The recent audit found that just four of the 33 takeaway pizza outlets targeted in Brisbane, Sydney, Melbourne and Adelaide were found to be doing the right thing when it came to paying staff, and keeping proper records.

Inspectors discovered that 20 workers had been underpaid a total of $1,978 in just one month.

In addition, many of the stores weren’t paying delivery allowances and leave entitlements, and some had made unauthorised deductions from their workers’ wages.

Franchisors can now be held liable for underpayments

Industrial relations advocate Miles Heffernan from WAGETHEFT.net.au said recent changes to legislation meant that a franchisor can now be held legally responsible for workplace breaches committed by their franchisees.

“Domino’s clearly has some problems with its systems, or its training, or its business model – either way, it really needs to pull its finger out and educate its store operators about the importance of complying with workplace laws,” he said.

“There is no excuse for a company like Domino’s to be so slack in ensuring their operators do the right thing.”

Don Meij should be ‘ashamed and embarrassed’

Domino’s boss Don Meij is the highest paid CEO in the country, with an annual salary of $36.8 million.

“I’m sure Mr Meij expects to get paid his full wages every month, well so do the workers in his stores,” Mr Heffernan said.

“It’s a bit rich that he gets paid so much money every month, yet his hard working employees can’t even get what they are legally entitled to – what an absolute disgrace.  As CEO, he should be ashamed and embarrassed.” 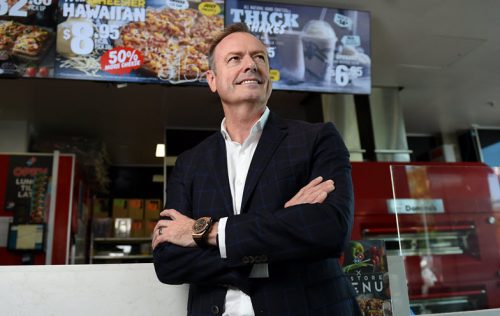 Don Meij – Domino’s boss never has trouble getting paid his proper wages and entitlements, unlike his hard working in-store staff.

The Fair Work Ombudsman says it is planning further unannounced audits of Domino’s outlets in the coming 12 months.

Wage theft affecting one in five workers according to new audit

One in five workers is being underpaid, according to new audit by the Fair Work…

The Fair Work Ombudsman has announced that it is dropping its legal action against Foodora,…