An arrogant politician has been penalised $80,890 for exploiting workers on election day.

The court found Jones failed to pay people who handed out how-to-vote cards during the 2015 NSW election.

Judge Tom Altobelli described Jones as “arrogant” after he promised the workers $30 an hour, and then paid them nothing.

He promised to pay them $30 an hour regardless of how many votes their local candidate obtained.

Jones even offered bonuses of $500 if candidates polled well. 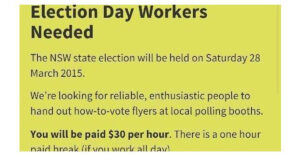 Arrogant politician admits he never had the money

Jones admitted in court that the No Land Tax Party planned to pay the wages with public funds that are only paid when a candidate is elected to the parliament.

However, none of the party’s candidates managed to do so.

Judge Altobelli slammed Jones for suggesting to the court that the lack of payment had no impact on the workers:

“It cannot be seriously accepted by the court that not being paid approximately $300 for the day has had a material impact on their lives, well being or finances”.

“The submission made on behalf of the Respondents is both inconsistent with the evidence before the court from the workers themselves, and regrettably arrogant,” he said.

Sarah and Dimitrie Marsala handed out how to vote cards for the No Land Tax Party on election day in March.

They received a pay slip in late May, however, Jones has failed to pay them the $330 for a day’s work. 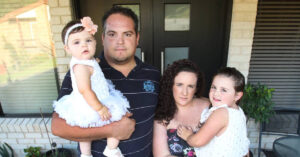 Industrial advocate Miles Heffernan once again called for the introduction of criminal penalties for wage theft.

“This is a blatant case of deliberate wage theft and further evidence of the need for criminal penalties,” he said.

“Jones is a liar and a thief who deserves a criminal conviction and possibly even jail time.”

Fair Work commenced litigation against Jones on behalf of 21 workers.

Jones has back-paid those 21 workers, however, thousands of others remain out of pocket.

Meanwhile, Judge Altobelli ordered the Land Tax Party to conduct a full audit to find out exactly how much money it owes, and to who.

However, Jones told the court the organisation has no funds or assets.