Adelaide’s Chinatown is rife with wage theft, according to the workplace watchdog.

The audit campaign follows widespread publicity about wage theft in Chinatown, such as a violent incident captured on video.

“We’ll be taking some compliance action there and we’ve also got more to come.”

Fair Work will release the full results of the wage theft audit campaign later in the year. 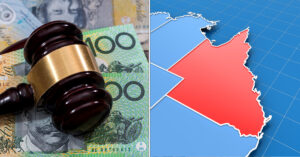 “Queensland has best wage theft laws in the country”

Parker noted inspectors found high rates of wage theft and other non-compliance issues during similar campaigns in other parts of Australia.

For example, Fair Work recently released its findings from a major audit of popular food precincts in Hobart.

“What we often find in these cheap eat places is that it’s vulnerable workers who get ripped off,” Ms Parker said.

“They’re often visa holders, and we focus on those, and young people.

“They don’t know their rights, they don’t know where to get help and they’re nervous about their visa status, they often get threatened with that.”

In February, workers in Adelaide’s Chinatown protested wage theft after an alleged violent assault on a young worker.

A video of the incident went viral.

It shows a man assaulting the worker who allegedly demanded payment for work she had done at the Bubble Tea shop.

Parker told ABC Radio that Fair Work can take a number of actions against employers who don’t pay their workers proper wages and entitlements.

For example, they can issue a Compliance Notice, requiring the employer to back-pay what they owe.

“If we find any evidence that there’s deliberate underpayment, for example, if there are two sets of books, or they’re not keeping records deliberately [and] workers tell us they’re being exploited — then we’ll take further action including taking them to court.”

Businesses also face infringement notices of up to $6,600 per breach.

Meanwhile, individuals face penalties up to $1,332 per breach.